BACK to The Drill Network

Back to The Liberty Greys 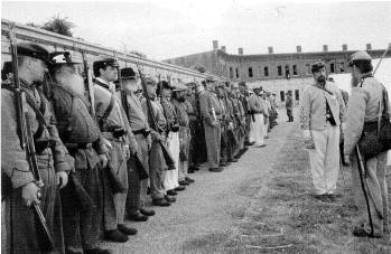 Our Battalion, the 6th Regiment, 1st Division, A.N.V., a reenactors umbrella organization, has adopted Hardee's Rifle and Infantry Tactics as the standard drill manual. Pocket soft cover editions are available from many sutlers at modest cost. We recommend that you obtain one for home study. The language can be difficult, but it is very useful for review of maneuvers you have covered in drill.

For those of you interested in more involved study of drill, please see our

FORMATION OF THE COMPANY

The Captain will command, To the Rear, Open Order. At this command, 1st and 2nd Sergeants will step four paces to the rear. At the command, March, the rear rank will step back to the line established by the Sergeants. The Company will then be put through the Manual of Arms, which can be found in Hardee's Tactics, School of the Soldier, or reviewed by any officer or N.C.O.

About Face. Lift the right foot and place it at a right angle with the left foot, heels three inches apart. Spin to the rear on both heels.

The Company will automatically double into four rankson any facing, or undouble to two ranks at the command Front. The Company will face in the given direction, and the rear rank will step one pace to the rear to allow room for the doubling.

Right Face. After the facing, soldiers who have counted "two" will step one pace over and one pace up to the right side of the "ones".

Left Face.  After the facing, the "ones" will step over and up, to the left side of the "twos".

Front. After the facing, the soldiers who have doubled will step over and up to their original places. The rear rank will step one pace up to close to their positions.

The following are the basic close order maneuvers, which can be found in Hardee's Tactics, School of the Company.

By the Right (Left) Flank, March

By Company Into Line, March

On the Right (Left) By File Into Line, March


BACK to The Drill Network

BACK to The Liberty Greys